STXBP1 encephalopathy is a serious neurological disease due to a mutation of the STXBP1 gene.

It is considered a rare disease. But in spite of its low frequency, recent studies indicate that it is one of the main causes of “early epileptic encephalopathy”.

Genetic alterations in the STXBP1 gene may lead to different forms of onset epilepsy during the first months of life. Characteristically including Ohtahara syndrome, when it occurs in a newborn or West syndrome when it occurs in an infant. Sometimes the infant presents both syndromes, and even others with or without these syndromes, such as Dravet syndrome and Rett syndrome, usually in their atypical forms, can be consecutively performed.

It is constantly on the road with neurodevelopmental problems, including usually moderate-severe psychomotor developmental delay and autistic spectrum disorder. Although almost all the information available comes from patients with epilepsy, there have been reports of patients with cognitive delay / learning disorder with mutations in STXBP1 who do not suffer from epilepsy.

Why does this happen?

Genes are DNA fragments that contain instructions for forming a protein. They are called mutations to the changes that occur in the genes and that can determine that the protein does not form or that it is abnormal.

The STXBP1 gene contains the information to produce the ‘SynTaXin Binding Protein 1’. This protein plays a vital role in releasing chemicals into the brain (neurotransmitters) that are used by brain cells to communicate with each other. A mutation in this gene and the consequent alteration in the protein, leads to abnormalities in brain function leading to epilepsy, developmental delay, learning difficulties and behavior problems.

Can it happen again?

Unlike other genetic diseases in which parents are carriers or are also affected by the disease, children with STXBP1 encephalopathy are carriers of “de novo” mutations. That is, the mutation has occurred in a germ cell (egg or sperm) without any of the progenitors being carriers of the mutation.

Can this be cured?

To the present day, there is no cure for this disorder and the treatment is only symptomatic, i.e. limited to treat the manifestations of the disease. However, it is very important to know the diagnosis to be able to make a genetic advice, to avoid unnecessary explorations, to anticipate the difficulties and to apply the most appropriate medical and pedagogical treatments to the child as soon as possible. 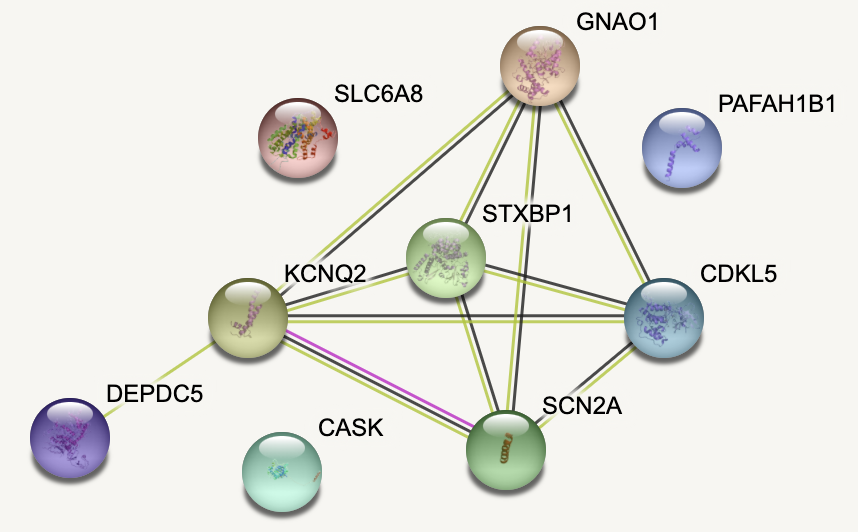